How to install M22 signaling devices

Signaling devices with an M22 thread are primarily installed in control panels. They are used, for example, to visually indicate the operating status on the control panel door. But they are also used on special vehicles. This article explains how to install M22 signaling devices in the best way.

Useful tips for the installation of signaling devices with M22 threads

Although the installation of M22 devices is quite fast and easy, we recommend having a look at the following three tips:

The exact dimensions can be found on the respective product page or in the instruction manual. The drawings below show the dimensions and installation guide of our ICM M22 panel mount LED multi strobe beacon. 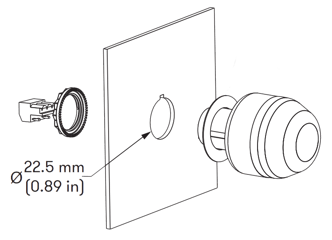 This table shows the standardized size of M22 threads according to the ISO metric thread standard.

What is the diameter of an M22 thread?

The nominal diameter for an M22 female and male thread is 22.00 mm. This diameter is specified in the metric ISO thread standard. In our dimensional drawings of the panel mount products, you can recognize the dimensions of an M22 thread by the corresponding designation "M22".

Advantages of devices with M22 thread

Our Series M22 – the Installable

Our built-in series M22 - the Loudest & the Brightest Installable - is available as visual, audible and visual-audible signaling device in three sizes (Ø 30 mm, Ø 45 mm and Ø 65 mm). The M22 series is characterized by its versatile functions and application possibilities.

Our built-in buzzers ESK and ESV are particularly characterized by their good price-performance ratio. They are available in two different housing colors, black and gray. Despite their small size Ø 30 mm the ESK and ESV convince with their volume. ESK reaches a volume of max. 65 dB, the ESV built-in buzzer even max. 85dB. The product portfolio of the built-in buzzer is completed by the ESM and ESG. Our piezo buzzers are the loudest built-in buzzers on the market with max. 103 dB.

Our M22 built in beacons score with a high lateral and frontal luminosity and signaling effect. The beacons are particularly durable and resistant to vibrations thanks to the high degree of protection IP65 and IP67 for pre-wired models. The built in beacons are available with the functions: steady/flashing, strobe/multi-strobe, xenon strobe and multicolor steady light in six different colors.

A special function of the M22 series can be found in the ITS, ITM and ITL models. These models can display two different colors. The lens consists of two separate color areas. Thus, this beacon can display two colors simultaneously or only one of the two colors. Other color combinations are available upon request specifically for your application.

The visual-audible devices combine the functions of a built-in buzzer and a beacon. The piezo buzzers with LED beacon (Ø 45 mm and Ø 65 mm) are available as LED steady light or LED steady/flashing light in the colors orange and red.